November 9th marks the anniversary of the first launch of the Saturn V, the most powerful rocket ever made and the one that would soon propel man to the Moon. The first stage of Saturn was powered by five F-1 engines, each making 1.5 million pounds of thrust. The engines on all three stages of the Saturn rocket were steered by Moog hydraulic actuators manufactured in East Aurora. 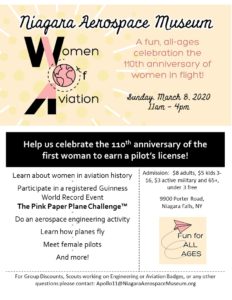 Our Corporate Sponsors Make it Possible

Niagara Aerospace Museum 9990 Porter Road
Niagara Falls International Airport
Niagara Falls NY 14304
716-297-1323
We use cookies to ensure that we give you the best experience on our website. If you continue to use this site we will assume that you are happy with it.Ok